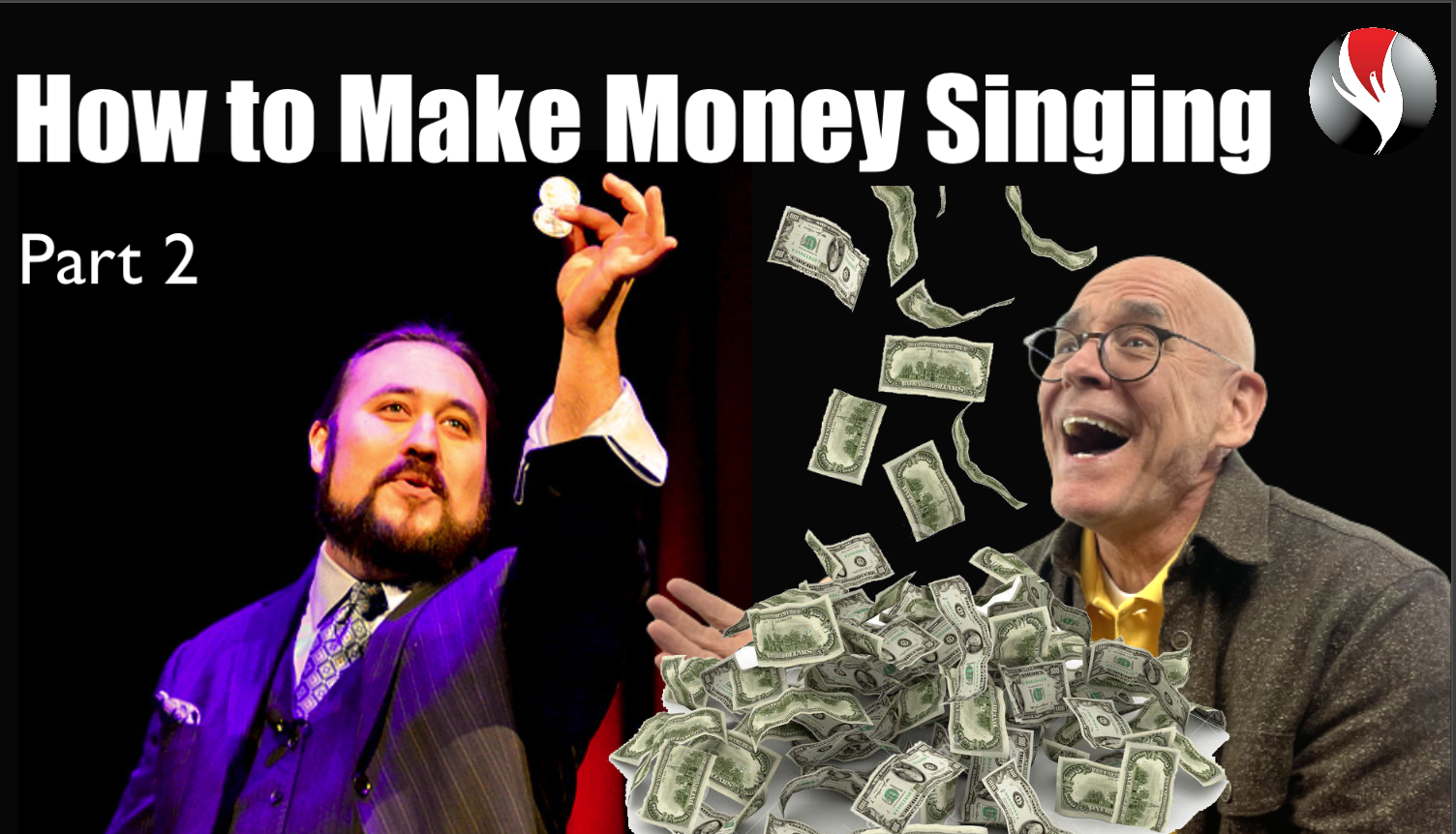 If you’re a singer who wants to make money from music, online singing or in person, prepare for a mind-blowing experience.

In part two of this three video series I continue my interview with Paul Draper, magician, actor, singer, and all-around performer who’s figured out how to make money from music through online singing and in-person.

In this video you’ll begin to see that you are in the “need fulfillment” business. You’re about to get dozens more ideas for dozens of places that will pay you to sing.

To help you start making money immediately, I’ve taken right from the video, 42 ways to Make Money Singing and put them on this PDF which you can download for free here.

Hold on tight…. Here we go!

Chuck Gilmore: There may be some reticence on the part of the singer or the artist to pick up the phone and ask. How do you get through that?

But if I call and say, “I see that your university has programming, and you have these big events in your big ballroom, and you bring in celebrity guests to entertain the crowd. Well, I’m going to create a huge show that will create a huge crowd that’s going to get rave reviews from your students. Is that something you want?” Yes. “Are you the person who can make that decision?” No. “Who makes that decision?” Susan. “Can I have Susan’s contact information?” It’s about deciding whose needs do I want to fulfill?

I was doing a show about a month before the pandemic happened for a group of linemen in Montana. And by line men I don’t mean hut, hut, throw. I mean, guys that hang power lines. These are rough and tumble guys, who climb telephone poles in the Montana wilderness and that’s what they do. They put this stage in the middle of the room, and this was a lunch show for lunch. They filled the room with 10 top tables. The tables were pre-plated with a bread roll, chicken sandwich, potato chips, ice tea, and lemonade.

They said to me, “Okay, you need to go stand on this stage. At the hour, we’re going to open up the door and 700 line men are going to come in. They’re going to sit down and they have 45 minutes to eat that sandwich and leave. You need to entertain while they’re doing that.” I have to also accept that they’re not going to care about what I’m doing. Those men cared about that chicken sandwich. They didn’t care about me, but I was making thousands of dollars to stand on that little stage and do something for 45 minutes.

Every convention, every trade show, every boat show, every everything that comes to the Salt Palace, they have morning events. They have what I call morning energizers. They need someone, if they’re from a particularly Republican area, they tend to sing the National Anthem at the start of the day. You could make a whole living just going to these events, singing the National Anthem for corporate events. They tend to have a lunch break. Furthermore, they have a dinner break. They have an after dinner banquet. And last but not least, they have breakout sessions where they need MCs and fun.

I’ve made a ton of money going out and doing these Comic-Cons, and Fan Exes, and anime expos, and all of these things as a host and MC, hosting and moderating celebrities and between telling jokes and singing songs.

I don’t remember the name of it. I should have looked it up. You can put it in later maybe, but it was all about that they would take Oklahoma and instead make it about a Ford. [Bathtubs Over Broadway} They’d make it all about whatever the trade show or the company was doing. You make these parody songs and these parody shows. I’ve been working a lot with Broadway actors from Frozen, and Hamilton, and Spring Awakening, and a couple of other shows, who put together a group called the Broadway Gram. Where it’s like I am your singing telegram, but they do it through Zoom.

They show up, and they sing a few songs, and tell a few stories, and they were even on USA Today. They were on USA Today, they were on the today show. They’ve had national attention from their living room, singing songs to people.

Chuck Gilmore: That is a whole lot of ingenuity that you’re describing. It seems like it comes so easy for you. Can you help us poor souls, who are quite as ingenious and can you think of some more examples of?

Paul Draper: Sure. Let’s do a real quick. Name an object in your room right now.

Chuck Gilmore: All right. I have a nice little picture on the wall there.

Paul Draper: Perfect. There are framing conventions where there are people that make picture frames, and that do framing, and own frame shops, and that they do that business. They have two major conventions in the US every year. They have a framers’ magazine. You can show up and you can say I’m going to do some of the ideas here. You can reach out to them, or just type into Google framing, framing convention, framers’ convention. If you look at your frame and you look at the actual company that your frame came from, you can go on LinkedIn and find that company.

See if that company’s big enough that they have someone on LinkedIn with the name of event planner, event manager, or events. If they don’t, then who’s in charge of their events is going to be the head of marketing, or the head of communications, or maybe the owner, or more often than not, the personal assistant to the owner is going to be in charge. Then you reach out to them and you say, “Do you go to any trade shows? Do you ever have a booth? Do you ever have events to celebrate your customers? Where all your customers come in, do you have a Christmas party for your staff? Do you have a labor Day event? Well, I would love to help you. That’s something that I provide. What we do is you pay me and I come and I entertain.”

If they don’t have any events, but they’re a big enough company. You might also say, “I can provide catering and I can provide design.” You build that into the budget and you hire someone to cater it. You hire someone to design it. Now, you’re the event planner. You go to them and you look at what they do and you say, “What are their needs? How can I fulfill it?” What need does a singer fulfill?

Anything from a county fair, or state fair, to an art festival, to any place where they’re human beings coming together for something. They need someone who’s comfortable getting on a microphone in front of everybody, talking to them, and touching them emotionally. Having a moment of emotional connection. Having a moment of emotional reach of sharing a bit of beauty and art to get them to unify them in the morning. To energize them at the start of a day, to break up their afternoon. To create a memorable moment when things happen. Let’s say, I saw on your webpage, you played Don Quixote. Don Quixote is a show all about transformation.

It’s the author, de Cervantes transforms to Don Quixote, only to save his own life here in the prison. Don Quixote, the simple man, through reading transforms into this other person. Through his transformation, he’s able to transform Sancho and transform Aldonza into Dulcinea. You can use that as a story of transformation, of change of difficult times. You go to a company, a tech company, and you say your company is all about innovation, and all about change, and all about transformation. What I’m going to do is I’ve created a show with some of the great songs from musical theater about transformation. I’m going to turn it into a little talk about your company.

You go out on stage and you say, “Each of us, every day, we have to put on our suit. We have to put on our character to go to our job. We have to throw aside our fears of the past world and become somebody else in order to face this world, this difficult, challenging, terrifying world.” In the great musical, Man of La Mancha, Don Quixote does the same thing. I shall impersonate a man. Come, enter into my imagination and picture him, if you will. His name is Alonzo Kahana, a country squire, no longer young boney, hollow faced, and you go into it.

You can come in and say something’s changed me, Wicked, and she changes. She’s come to this revelation, this change, she’s going to be who she is. Just like that, you can do that with an iPhone. iPhone will let you be who you really are inside. We just have to say I’m in the need fulfillment business. I am more than just a vessel for whatever show the local theater company is putting on. I’m an individual, who can engage groups of people and pass emotional experiences to them that will energize, excite, delight, and create happy memories for years to come. That’s what we’re selling is singers.

More awesome info, right? Check now for video #3. If it’s not there, it’s coming soon. But get the 42 Ways to Make Money Singing PDF now. There’s no need to wait. Get it here.

I’m Chuck Gilmore with Power to Sing. For you, making money singing can be second nature!